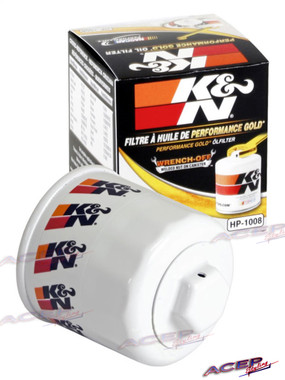 INCLUDED IN THE BOX:

K&N Performance Gold Oil Filters use resin impregnated cellulose filter media. This allows for higher flow rates while providing outstanding filtration. High filter flow rates are important in racing vehicles where heavier grade oil is used and the oil is pumped much faster than in a standard vehicle. When the engine is circulating oil at high GPM rates, the high-flow oil filter helps reduce the loss of pressure through the filtering process.

If you decide on money back we will fully refund your total amount after we receive the returned item.

As soon we receive the returned item we will send out the new item an adjusted payments according to type of exchange (even exchange, less total amount or greater total amount).

There is NO restocking fees, but all shipping fees for returns or exchanges are the customers' responsibility.