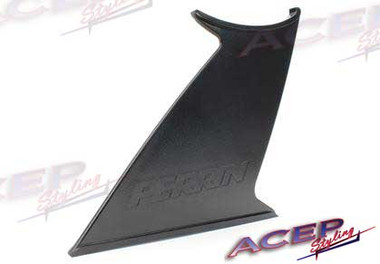 Add the PERRIN Performance STi Wing Stiffi to your ride and eradicate that wing from bouncing forever. *Eliminate Wing Bounce* Fitting perfectly between the upper and lower rear wing, PERRIN Stiffi's stabilize and support your wing eradicating wing bounce forever. Simply place the Stiffi (or multiple if you desire a truly custom look) between the underside of you upper wing and secure into place using our 3M high tach adhesive. This makes installation of our Stiffi a solid yet completely reverse-able upgrade. *Construction* The PERRIN Wing Stiffi has and airfoil shape, tapering in size from front to back reducing drag, and eliminating the possibility of added noise. Molded from black plastic with an OEM like texture, Wing Stiffi's look good right out of the box or paint them for a color matched OEM look. *Configuration* There are 3 recesses on the underside of the STI wing for the PERRIN Wing Stiffi to attach to. Use a single Stiffi to eliminate bounce. Use two for a sportier more aggressive look or use 3 for a truly unique WRC look.