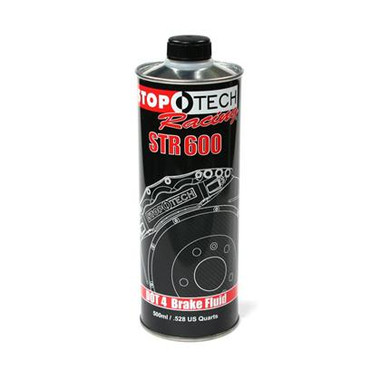 StopTech High Performance Brake Fluid conforms to and exceeds the current specification of U.S. FMVSS 116 (§ 571.116) DOT 4, is road legal, and compatible with modern ABS and other vehicle dynamic control systems. StopTech brake fluid is mixable with all DOT 3 and 4 products.

How to Bleed Your Brakes

You may return most new, unopened items within 30 days of delivery for a full refund. We'll also pay the return shipping costs if the return is a result of our error (you received an incorrect or defective item, etc.). You should expect to receive your refund within four weeks of giving your package to the return shipper, however, in many cases you will receive a refund more quickly. This time period includes the transit time for us to receive your return from the shipper (5 to 10 business days), the time it takes us to process your return once we receive it (3 to 5 business days), and the time it takes your bank to process our refund request (5 to 10 business days). If you need to return an item, simply login to your account, view the order using the "Complete Orders" link under the My Account menu and click the Return Item(s) button. We'll notify you via e-mail of your refund once we've received and processed the returned item.

Even though we guarantee close to perfect fitment, this part may require very minor sanding or trimming due to the conditions a vehicle has been exposed to (weathering, driving, age, collisions, extreme temperatures etc.) If this item does not fit due to a factory defective item, please contact us so we can further assist you in an exchange or return. Please have the part# ready, the part number is located on the back of the item (example: IP#00001).

There is no money back or exchange if the vehicle has been in any past collision and the part does not fit correctly. If the item is altered in any way, cut, shaved, sanded, or painted by anyone other than the manufacturer ACEP Styling, we assume no responsibility to the item or customer Installation instructions included | Professional installation highly recommended | Product intended for off-road use If you have any question or need customer service. We assume no responsibility of automotive laws required by the state, all items are for off road or show use only.